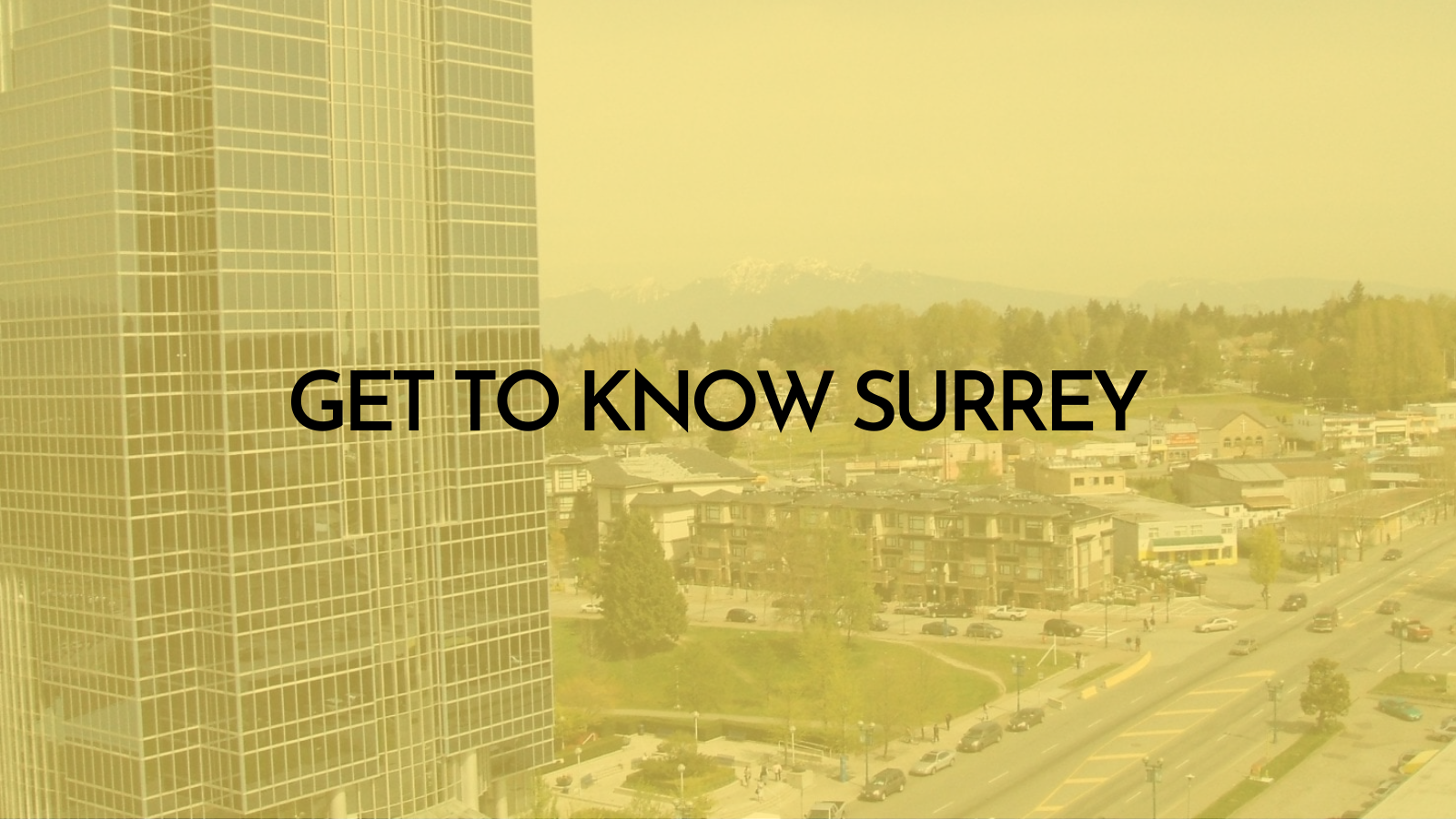 Surrey is made up of six communities and is in the midst of redefining its downtown core into a walkable, transit-oriented area for not only business but as Surrey’s cultural and entertainment hub.

It wasn’t until 1957 that the municipality adopted a grid system of streets and addresses. Older communities, where the road patterns did not fit the grid system, retained their names like Crescent Beach, South Westminster, and Bridgeview, not to mention the area in west Cloverdale known as Cowtown where you’ll find street names such as Hereford, Holstein, and Jersey.

Once the seat of Surrey’s municipal government, Cloverdale retains many of the city’s original heritage buildings, a mix of post-war and newer neighbourhoods, a clean technology business park, and agricultural land on the outskirts of the city. Newton has a variety of recreational and cultural facilities, and South Surrey is blessed with beaches, farmland, and mountain views. Fleetwood has many parks while Guildfordenjoys numerous natural walking trails both within easy access to Surrey’s new and growing downtown centre in Whalley where you’ll find such landmarks as City Hall, City Centre Library, Simon Fraser University (Surrey campus), and Holland Park.

Surrey is home to:

Know Your Neighbours in Surrey

From North Surrey to South Surrey, housing options are as diverse as Surrey’s communities. You’ll find new urban developments focused on dense and walkable city centres, mixed-housing with pathways between neighbourhoods, schools, and shops, to older single-family homes in neighbourhoods with spacious lots.

Given its burgeoning population, and equally diverse cultural population, most ethnic palettes are catered to throughout Surrey’s six communities whether you’re searching for an independent or franchise restaurant, cafe, coffee shop, or sushi bar.

Ask a long-time resident and they may tell you the names of places such as the Old Surrey Restaurant, Roadhouse Grille, the Palmer Room at Northview Golf & Country Club, and Elisabeth’s Chalet to name a few. Surrey has a number of establishments for fine dining, a quick bite on the fly, take out, a caffeine fix, or a beer after work.

Fun Stuff To See & Do in Surrey

With over 200 parks in Surrey, it’s not surprising that Blackie Spit, Redwood Park, Crescent Beach, Historic Stewart Farm, Tynehead Hatchery, and Green Timbers Urban Forest are top of resident’s mind as the places to explore. For more to do and see in Surrey, visit Discover Surrey.

The Surrey Recreation Guide will tell you the latest programs happening at Surrey’s Recreational Facilities and other venues throughout the city.

Surrey School District 36 is the largest district in BC and growing. You’ll find local private schools and a range of public education and support programs for students of all ages at www.SurreySchools.ca. You can easily locate your child’s school by typing in your street name in the School Locator.

Each year Surrey hosts five major special events: Party for the Planet (in April), Surrey International Children’s Festival (during May), Canada Day (July 1 eh!), Fusion Festival (in July), and the Tree Lighting Festival in the month of November. From June to October, residents can also enjoy locally-sourced seasonal fruits and veggies at the Surrey Urban Farmers Market in the North Surrey Rec Centre Plaza.

For a complete listing of festivals, annual city events, and community-hosted events throughout Surrey, check out Discover Surrey’s Event Calendar and the City of Surrey.

Your Guide to the City of Surrey Resources

There are several apps specifically for Surrey residents to stay informed and connected, like the Surrey Request to report a problem, Surrey RCMP app, Rethink Waste app, Dinesafe Surrey app, Surrey Libraries app, and COSMOS app. Other useful resources include: