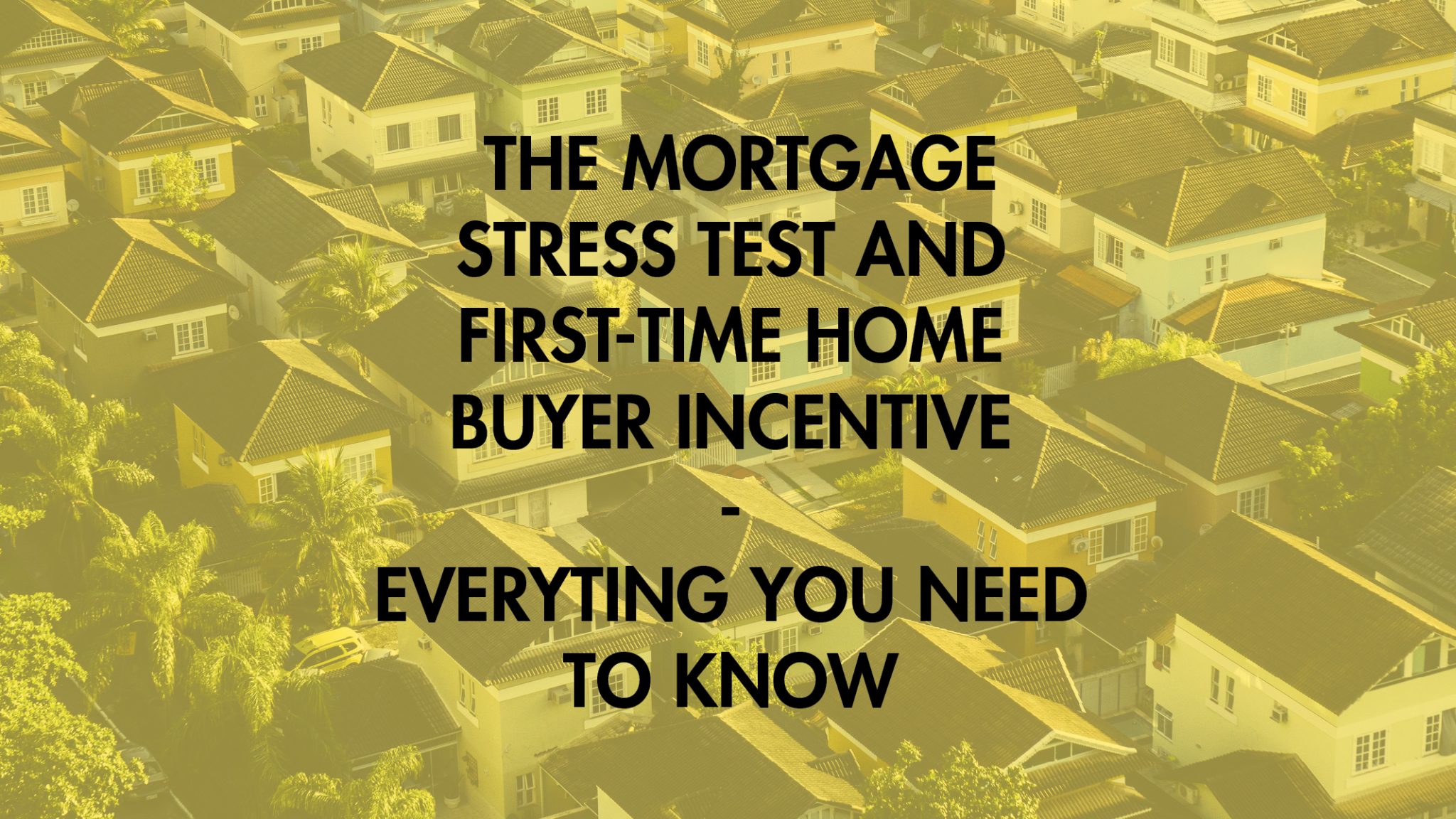 There’s no denying that Canadian real estate has changed quite a bit over these past few years. From the average price of a single-detached home to a rise in condominium or strata purchases to the demographic of people actually looking to purchase housing, the Canadian real estate market has continuously shifted year after year to reflect current buying behaviours.

In fact, in the past four years, since 2016, the Canadian real estate market underwent (and is currently undergoing) some major changes – those being the Mortgage Stress Test that launched towards the end of 2016, and the First-Time Home Buyer Incentive that just recently came into effect on September 2nd, 2019.

One of the largest ways Canadian real estate has changed is with the roll-out of the Mortgage Stress Test, which was introduced by the federal government in 2016 and was deployed into two stages, the first commencing in October of 2016 and the latter in January of 2018.

The Mortgage Stress Test (or, MST), was a tactic put in place by the Canadian government as a way to discourage Canadians from throwing themselves into unnecessary debt over mortgages that they might not actually be able to afford in the future with both dynamic and fluctuating mortgage rates.

It was meant to force home buyers to adjust their expectations when it came to buying a home and ultimately limit the amount of money that they could borrow for their mortgages.

The Mortgage Stress Test actually made it much more difficult for homebuyers to qualify for a mortgage from a federally regulated lender.
The first stage, which was put into place during the month of October 2016, targeted buyers who put down less than 20% when purchasing a home.

By default, buyers who put between 5% – 19.99% for a down-payment have to purchase mortgage insurance – often aptly called Mortgage Default Insurance, or officially as CMHC Insurance (Canadian Mortgage and Housing). This insurance aims to protect lenders in the event that a borrower fails to make payments and therefore defaults on their mortgage loan.

And, although paying that extra percent on top of your mortgage payment can be a hassle, it’s ultimately a good thing as it allows a much more varied demographic access to the Canadian real estate market. Plus, as a result of the added protection, Mortgage Default Insurance actually helps to keep mortgage rates down and the overall risk of non-payment relatively low.

With the first stage of the Mortgage Stress Test, the Canadian government made it even more difficult for buyers who could only put down between 5% – 19.99% by “artificially” upping mortgage rates.

Because Canadian mortgage rates are at a historic, all-time low right now, the Canadian government has put the Mortgage Stress Test into place to ensure that when the bubble pops (and it will pop), that those home buyers will still be able to afford their mortgages.

At this stage, if you put less than 20% down on a home, you have to not only prove that you can afford your mortgage at the going rate (currently sitting between 2.85% – 4.5%) but also at an inflated rate – you know, just in case the rates do eventually go up.

Typically, your qualifying rate (meaning the rate at which you need to qualify for a mortgage loan), is determined by either the rate that your mortgage lender is offering you or the Bank of Canada’s conventional five-year mortgage rate (currently sitting at 5.19% at the time of this publication). Whichever of those two rates is higher is the one that you will need to qualify for.

That means that if your mortgage lender is offering you a rate of 3%, versus the Bank of Canada’s current 5.19%, you would need to be able to afford the 5.19% mortgage rate to be approved – even if your actual mortgage payments would only be that original 3%.

In the second phase, which was introduced in January of 2018, buyers who placed more than 20% were now targeted.

For this stage of the Mortgage Stress Test, buyers who put down more than 20% and did not require Mortgage Default Insurance would then need to prove that they could afford either that same Bank of Canada’s conventional five-year mortgage rate (again, 5.19%) or whatever mortgage rate their lender was offering them plus an additional 2% – whichever of the two is higher.

Ultimately, the Mortgage Stress Test made it more difficult for homebuyers to qualify for a mortgage – thus, it made it somewhat more difficult to buy a home in surrey. However, there is a major plus-side.

Since the Mortgage Stress Test has been introduced, the appreciation of home prices has slowed considerably and average home prices have started to go down, making housing more affordable across the country. This trend gives homebuyers a chance to put money away and save for a down-payment versus struggling to keep up with costly, ever-rising housing markets. This also means that first-time homebuyers might have a better chance of making their stake in the Canadian real estate market.

Speaking of first-time homebuyers, did you know that the Canadian government recently rolled out its new plan for shared equity mortgage – also known as the First Time Home Buyers Incentive?

The First Time Home Buyers Incentive (or FTHB Incentive) came into effect just this week on September 2nd, 2019. The FTHB Incentive is supposed to make it easier for first-time homebuyers to break into the Canadian real estate market by allowing homebuyers to gain access to smaller mortgages with less costly monthly payments – and it’s all coming from funding through the government for down-payments.

Here’s how it works:

As a first time homebuyer with this incentive, you could be eligible for a top-up of 5% (for an already existing home) or 10% (for new construction) on your down-payment funds.

The top-up, which serves as an interest-free loan from the government, allows first-time homebuyers the chance at breaking into the Canadian real estate market when previously, it may have been too difficult to do so.

Although the top-up is technically a second mortgage, those who take advantage of the FTHB Incentive won’t be required to make any regular payments (although, you certainly can). Instead, the loan will be repaid when you either sell the home you purchased or after it’s been under your ownership for 25 years – whichever comes first.

There is, however, a catch.

On the flip side, if your home goes down in value, then the government would actually lose out in this case and your repayment would be less than the initial top-up amount.

Also, not everyone can be considered eligible for the First-Time Home Buyer Incentive.

To be considered eligible for this incentive,  you have to be a first-time homebuyer (of course), and your annual household income must be equal to, or less than, $120,000. Plus, your mortgage amount is capped at four times your annual income plus the initial incentive amount and your Mortgage Default Insurance (should you require it) – that means that at most, under this incentive, you could only borrow up to or around $500,000

Regardless of the capped amount, this is a valuable incentive for first-time homebuyers to break into the Canadian real estate market and has great potential for the Canadian economy as more and more people who felt previously excluded from being able to purchase a home are encouraged to start seriously thinking about homeownership.

ABC’s Shark Tank alumni and former real estate mogul, Barbara Corcoran often advises the younger generation to “get in the game” and that “the faster you buy your first home…the better”. This is because, typically, the longer you wait, the more average home prices will rise, thus the more difficult it becomes over time to purchase a home.

With both the collaboration of the Mortgage Stress Test mentioned earlier slowing down and decreasing overall home prices, and this new First-Time Home Buyer Incentive being rolled out this month to make it easier for first-time homebuyers to purchase property, those who are part of the millennial generation now have a fighting chance of owning real estate, earning equity, and investing their money in a growing market. They can finally “get in the game” and realize their dreams of owning their own home.

It’s still uncertain how these tests and incentives will play out over the long-term, but so far, the outlook is fairly optimistic.

Official government information for the Mortgage Stress Test can be found here: